On July 23, we will celebrate World Sjögren’s Day, hosted by the Sjögren’s Foundation.

As stated by the Sjögren’s Foundation, Sjögren’s is a systemic disease that affects the entire body, with symptoms that may remain steady or worsen overtime. The way the disease progresses varies widely, making it difficult for patients and their physicians to effectively diagnose and treat. While some people experience mild discomfort, other experiences debilitating symptoms that greatly impair their ability to function. Early diagnosis and proper treatments are crucial toward preventing serious complications and greatly improve a patient’s quality of life.

Roughly half of the time Sjögren’s occurs alone, while in the other half of cases, it can occur in the presence of another autoimmune connective tissue disease, such as Rheumatoid Arthritis, Lupus, or Scleroderma.

In addition, Sjögren’s is often misrepresented as being a rare disease, however, it is estimate that four million Americans are living with this disease, making it one of the most prevalent autoimmune diseases in the country.

What are the symptoms?

While many patients experience dry eyes and mouth, fatigue and joint pain, Sjögren’s can also cause dysfunction of organs that includes the…

Patients also have a higher chance of developing lymphoma.

What is World Sjögren's Day?

World Sjögren’s Day takes place annually on July 23. The Sjögren’s Foundation joins together with other Sjögren’s organizations from around the world to celebrate Dr. Henrik Sjögren’s birthday, the Swedish ophthalmologist who discovered the disease in 1933. This day not only commemorates Dr. Sjögren, but also helps to raise awareness for the disease.

Learn more about Sjögren’s and how you can help raise awareness by clicking on the button below!

Save 50% on your order with your Sjogren's Special Offer

How is Lubricity associated with the Sjögren's Foundation?

You can check out the Sjögren’s Strong Podcast, where we discuss the benefits of Lubricity Dry Mouth Oral Spray and how it works differently than other dry mouth products.

Lubricity Innovations conducted a study including patients with Sjögren’s, whose primary complaint was Xerostomia with an unstimulated salivary flow rate of <0.25ml/minute.

At the conclusion of the study, nearly 70% of participants reported that Lubricity was better compared to their usual dry mouth remedy.

Notably participants in the clinical study reported the following:

What does the Sjögren's Community say about Lubricity?

“I suffer from dry mouth due to Sjögren's Syndrome and the Lubricity product, from my experience, is the best for keeping my mouth moist. It does not have an unpleasant aftertaste and is not too sweet which are my major complaints.”

“I keep Lubricity under my pillow so I can reach it easily when I am in bed. I wake up during the night with cottonmouth sometimes. I really like Lubricity.”

"I like the effect of lubricity as it provides some temporary relief when needed. It is beneficial at bedtime and helps at least during the attempt to get to sleep. I also appreciate the packaging and effective pump bottle."

My sister is a nutritionist at a cancer center. She read about Lubricity and ordered some samples. Since I am her "dry mouth" tester, she sent me 2 of the samples. At first I was skeptical since it was slightly thicker and less minty than the product I was using. After using Lubricity for several nights, I noticed that my mouth was staying hydrated for my night's sleep, and I wasn't waking up with a totally dry mouth in the middle of the night. I reported my findings to my sister, who told me her patients had similar reactions. Lubricity is my go-to product.
Jamie2021
"Your product is a good one to use at work. I don't spit it out"
Helen2021
“Lubricity is one of many products I use for dry mouth. Compared to other sprays, it is the one I like & use. It works well & is not minty. Mint burns my dry mouth & many Sjogren's patients dry mouths. The biggest challenge is finding products without mint including gum. That limits product choice from gum to gels & sprays. Companies can't seem to get away from mint. I use Lubricity between & with other products. It is ever so slightly sweet. It does not burn. It contains xylitol which is naturally anti-bacterial. It helps prevent cavities. It is the best oral moisture spray I have found.”
Marie2021
“"Much better than Biotene. Perfect for people that cannot tolerate peppermint"”
Mary2021
“Better results than what I was getting with other products”
Megan2021
"Lubricity moisturizes the inside of mouth and tongue and lasts for hours"
Chris2021
"Great product that provides comfort and relief from mouth dryness"
Amy2021
"I would buy Lubricity again. It definitely helps my dry mouth and voice"
Cathy2021
"Your product seems to last longer the others I've tried. Very important."
Eileen2021
Previous
Next

Lubricity is an odorless, flavorless, and colorless spray that is perfect for people who are overly sensitive to taste. Our Dry Mouth Spray also has Zero Calories, NO Gluten, NO Alcohol, NO Sugar, and is Vegan-Friendly!

How to use Lubricity?

Lubricity Dry Mouth Spray comes in a convenient 0.5 oz and 2oz spray bottle. Simply point and spray 3-5 times per use. When used as directed, Lubricity provides up to 4 hours of relief from dry mouth symptoms. 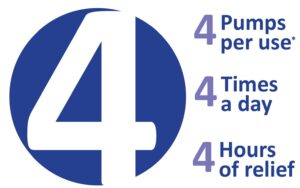 Use Lubricity after a meal and before bed. If needed, Lubricity can be used more than 4 times per day. *Some may need 3-5 pumps per use, as the bottle needs to be primed upon opening. Relief from symptoms begins immediately. Maximum effectiveness is achieved after 72 hours of continued use.

Important: If you are pregnant or breastfeeding, please consult your physician before using Lubricity. DO not use Lubricity if you are taking any medications that are contraindicated with the product. Please consult with your physician if you have any concerns regarding the use of this product. Keep out of reach of children.

Where can I purchase Lubricity?

You can purchase Lubricity Dry Mouth Spray on our website and from the following online retailers. Don’t forget to subscribe and save through Amazon.